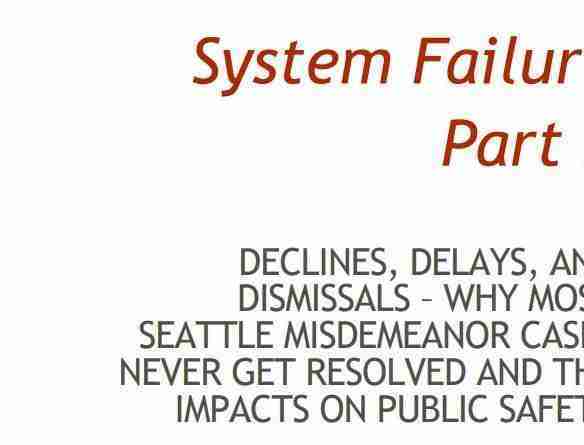 Nine months ago the SODO BIA and other Seattle neighborhood business districts commissioned the System Failure report that demonstrated how a substantial portion of high-impact criminal activity in Seattle’s busiest neighborhoods is committed by repeat offenders. The report focused on an initial sample of 100 prolific offenders and how the current criminal justice system has failed to meaningfully respond to or change their behaviors.

In the months that followed, Seattle and King County leaders, criminal justice stakeholders and human services representatives began a dialogue about the findings and action needed to address them. Early in September the Mayor and County Executive announced a series of public safety-related investments in their proposed 2020 budgets. We thank them for their leadership on these issues, while also acknowledging that work is far from done. In fact, since our initial report was released, 87 of the 100 prolific offenders have been booked into jail again more than 220 times.

System Failure, Part 2: Declines, Delays and Dismissals is a continuation of our efforts to better understand and shed light on the failures with our criminal justice system. The report finds that less than one out of three cases find a meaningful resolution and have rippling effects that impact victims, the police and repeat offenders. In releasing this report, we call on the City Attorney to develop and share a detailed plan on how to achieve better outcomes through improved coordination and effective use of criminal justice resources.