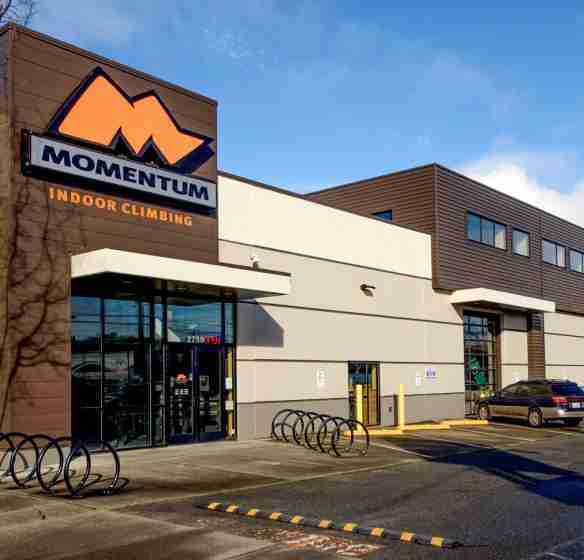 Over the years, Seattle has worn many hats. It’s been known as the home of grunge, coffee, Microsoft, the American aerospace industry and more. However, it’s reputation as a climbing town has predated all of that, starting with the first known climb of Mt. Rainier back in 1870. There is simply no way to give a worthy account of the area’s legendary climbing history in a few sentences but, suffice to say, the high volcanoes, jagged spires of the North Cascades and world-class granite crags like Index and Leavenworth have been training grounds for some of the world’s greatest and most prolific climbers since the dawn of the sport.

However, in a place soaked in the near-constant hose of moisture flowing off the Pacific, staying in shape for such an activity is anything but straightforward. It’s no surprise then that the locals got creative. In 1939, Seattle became home to the world’s first artificial outdoor climbing wall (Schurman Rock in West Seattle) with others to follow. Then, in 1987, the country’s very first indoor climbing gym set up shop here. Though rudimentary compared to today’s gyms, it was nothing short of revolutionary in terms of its impact on the sport. It turned out that practicing climbing inside, on artificial holds with no fear of falling, was really, really fun too. As word spread, so did the climbing gyms. This year, there are over 600 climbing gyms nationwide, and the latest trend of bouldering (gyms with no ropes and only lower features to climb with large pads to land on) makes up a rapidly-growing 40% of those gyms.

Seattle’s newest bouldering gym (as of this instant) is Momentum Climbing’s SODO location. It opened in 2018, a block south of Starbuck’s headquarters on First Avenue South. Momentum­, a Utah-based company, represents another growing industry trend–gym operators branching out into new markets with branded offerings, both regionally and nationally. In doing so, they bring hard-earned operational knowledge from other locations, for greater efficiency and often, a refined experience.

So, why Seattle? Why SODO? The answer lies in both climbing’s booming demographics and Seattle’s shrinking geography.

“Every [climbing] gym in Seattle is full most nights of the week”, says Jeremy Park, General Manager of Momentum SODO. “To a certain extent, the city is a little underserved.”  Park is quick to clarify that the term “under-served” has nothing to do with the quality of the six (six!) climbing gyms already in the area. Rather, it’s the logical result of a rapidly growing city. “There are a lot of people that want to do this, there just isn’t the capacity for them all to do it.”

While finding solid numbers is oddly challenging, by some estimates, Seattle’s population has grown by roughly 60% since that first gym opened. Much of that growth can be attributed to 20- and 30-somethings – a segment of the population that happens to also be the vibrant base of the booming interest in climbing.

As far as our “shrinking” geography goes, both of Seattle’s original climbing gyms are within a mile of each other, by the Ballard Locks. For south enders, the mere thought of driving across town after work in today’s Seattle traffic is no longer tenable. Even the 2.5 miles to the “other” bouldering gym is now entering the calculus of convenience for South End residents. As the area’s furthest-south gym, Momentum offers a clear advantage. With SODO being a regional epicenter for businesses, there is also a huge opportunity for mid-day use by area workers. There’s a lot more to do than just climb at Momentum, and the ample mix of private and street parking in SODO makes a quick escape from the office a reality for many.

Of course, one of the other key drivers of location for such an operation is space. Even a bouldering gym, with no ropes or tall walls, needs uncharacteristically high ceilings and an open floor plan for the climbing features inside. For Momentum, repurposing the old Sears Tire and Service Center was the answer.

“I think the biggest change was popping the roof up by about 15 feet down the center of the building”, said Park. “Beyond that, the conversion seemed relatively straightforward.”

Being a legit climbing gym these days however, means offering far more than just climbing. Momentum offers a comprehensive workout area, including weight-training, cardio and yoga classes, plus a dedicated co-working space and Wi-Fi for those multi-tasking freelancers that want to climb a few routes between emails.

“People definitely come here exclusively for the yoga and fitness classes. The yoga alone is less expensive than a membership at most yoga studios and our instructors are great. Here you get the weight training, cardio and climbing too. It’s like a bonus.”, laughs Park.  There is even free climbing shoe use for members that just want to dabble, while primarily doing yoga or using the weights. It would be hard to imagine anyone not getting hooked on the challenge and fun movement of bouldering though.

Of course, there are a range of other ways to try out Momentum, ranging from a simple drop-in, to discounted punch-cards for the nearly committed. After a short video indoctrination on safety, bouldering is an activity that’s accessible to just about anyone with an interest and kids in particular seem to love it.

In addition to offering these key benefits, being unique is also important. Park believes Momentum does that not only on a facility level, but in the community they attract as well.

One of the key aspects you notice just walking into the space is the wide-open feel.  “We have a new, modern layout as far as gyms go. Primarily that means open walkways around the walls.” Park believes this, in contrast to the wall-to-wall mats of other gyms, adds to the aesthetics with a generally more open feel, and lends itself to a safer experience overall. “We have plenty of space away from the wall, so we don’t have people sitting under climbs and it’s just an easier task to keep it all clean. This latter point is a big deal at a climbing gym. With chalk being frequently used to keep sweaty hands from slipping off holds, this benefit cannot be understated. Momentum is nothing if not the cleanest gym in town. And did I mention they have air conditioning? Make a note of that for summer.

Ultimately, any gym is just a room with walls until someone screws the plastic holds to them, creating the “problems” of movement that are so fun to solve. Route-setting is something Momentum takes great pride in, and Park feels it’s what sets the tone for the gym’s community as well. “I would bet that we have a community that is generally experienced in climbing and climbs outside on a regular basis. That’s why we try to set realistic routes that feel more like real climbing.” While that may sound logical, some gyms lean toward odd routes, with impractical and unrealistic moves between holds that you wouldn’t normally encounter on rock, like huge jumps or injury-inviting contortions. While there is a place for that, Park believes realistic route setting attracts experienced climbers that are actually looking to get better outside. According to Park, the Momentum crowd skews slightly older and has a nice, mellow vibe. Ironically, this is what makes the whole experience less intimidating for newcomers and provides a nice balance of climbers across a wide spectrum of experience levels.

Of course, within a few minutes of hearing this delicately nuanced explanation of route-setting philosophy from Park, I see one of their route setters testing a new, upside-down route that involves hanging bat-like from one’s toes to reach the final hold, next to the ground. “Well, I never said we don’t have fun, too!”, he assures me with a big grin.

So, what are you waiting for? Combined with some secret plans on the horizon that stand to make the location an even cooler and easier place to spend time, Momentum SODO will happily sate Seattle’s ravenous appetite for fun and unique ways to stay in shape, regardless of the weather.