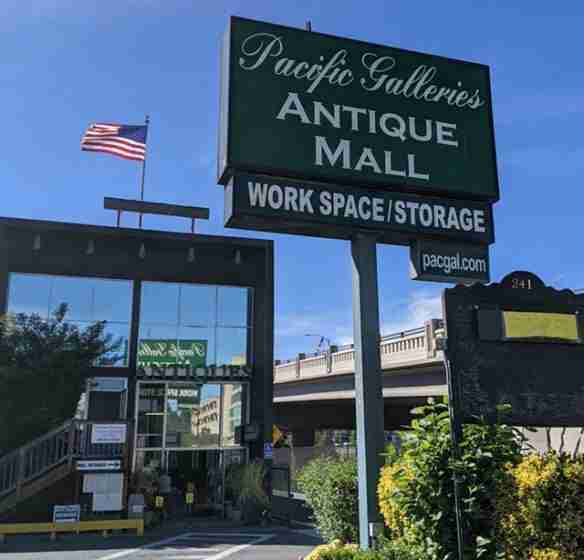 September 10, 2021
Pacific Galleries Antique Mall was planning to close for good at the end of August, but a deal materialized in the last couple of weeks to save Seattle’s oldest antique mall from closing forever. Under the new ownership of Tom Gorz — an antique dealer who co-owns the nearby Epic Antiques — Pacific Galleries will officially reopen as Lander Street Vintage on October 1. The 11th-hour agreement is welcome news for Pacific’s community of buyers and dealers, and it ensures that Seattle’s cornerstone of vintage and antique goods is safe for years to come.
“We’ve had so much support from customers, it’s been incredible,” Gorz said, noting that there’s still plenty of work to be done before reopening. “It feels in a way a little overwhelming, but overall [I’m] very joyous and excited to get this venture going for not only the history of Seattle, the history of an established destination location, but also as a companion location for Epic Antiques.”

Pacific and Epic Antiques already felt like complimentary malls even before the new transition, said antique dealer SandyMarshall. Known as the Treasure Queen, Marshall sells vintage decor, jewelry, small furniture, and artwork. She was a vendor at Pacific for about 12 years and at Epic ever since it opened in 2018. Rather than taking business away from Pacific, Epic added even more value to a destination trip, especially for buyers coming in from far away. “Customers go to both places,” Marshall said. “It makes the trip worthwhile to go to both.”

Epic houses 60 vendors in a 22,000 square foot facility, which also includes some offices and an upholstery studio. The vibe is upbeat and welcoming, featuring an eclectic mix of music from Nina Simone to Erasure. Epic also hosts the SoDo Flea Market once a month.