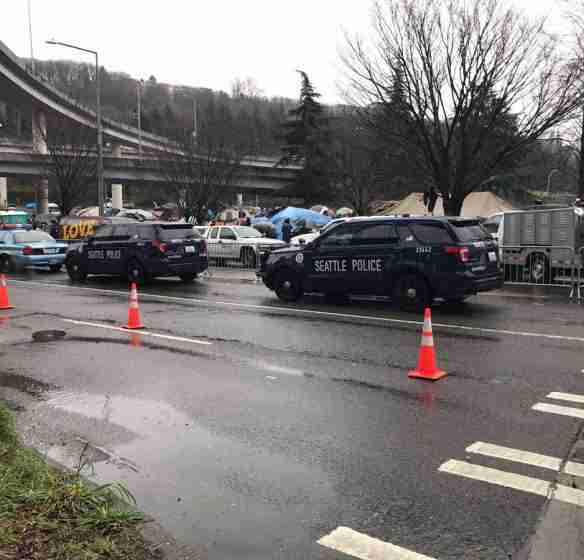 SEATTLE – Time is up for residents of an unauthorized homeless camp known as “The Field” or “The Triangle” located in Seattle’s SoDo neighborhood.

The City of Seattle has given notice to campers at Airport Way and Royal Brougham Way. They have to be gone by 9 a.m. Tuesday when the cleanup starts for health and safety issues.

But the group of people living in the homeless camp were hoping to change the city’s position. They tell The Seattle Times they have drafted governing rules for the camp which they presented to the Seattle City Council at its Monday meeting.

“We just ask that you look at these documents, consider them in good faith,” he said, noting that the camp residents have previously asked the city for assistance addressing issues, such as trash, but have not had any response.

Homeless advocates at the council’s meeting called the outdoor living “less-traditional housing,” urged the city not to sweep the camp, and argued that there is no place for them to go — that moving people from place-to-place in their tents does not help the situation. Some called the Seattle police “storm troopers.” Other campers argued that they ended up at The Field because they were swept from other areas in the city — sidewalks and other camps.

The homeless camp residents hope to convince the city to delay the cleanup and add the encampment to a list of authorized tent cities, which currently includes Ballard, Interbay, Myers Way and Rainier Valley.

After hearing the campers’ arguments, four council members said they would be in favor of signing a letter drafted by the homeless residents asking for a one-week stay — Dobora Juarez, Kshama Sawant, Mike O’Brien, and Rob Johnson.

Despite speaking in favor of giving the campers some more time, Juarez said that the camp is not “a field of dreams.” She noted that three teenage girls were recently victims of sex trafficking in the camp, and that there is a rat infestation in the area.

Councilmember Sally Bagshaw said that she has been down to the camp and came away with serious health concerns about the area. Herbold expressed similar sentiments.

“I went there on Friday,” Bagshaw said. “I’ve been there before — mud, water, up to our ankles. There’s an awful lot of stuff there that shouldn’t be there. It is not safe place for people to be … I’m not going to be signing this letter.”

The SoDo Business Improvement Area says it supports the city’s plan to close the homeless camp.

“It was always intended to be a short-term measure to accommodate people displaced by the cleanup of the Jungle while they waited placement in other shelters and housing,” wrote Erin Goodman, Executive Director SODO BIA in a press release.

Goodman said “biohazards, rats, mounds of garbage and criminal activity are victimizing the inhabitants” and the neighborhood.

“We are empathetic to the plight of the homeless, but strongly believe that encampments are not an acceptable housing solution for our city’s unsheltered residents,” Goodman wrote.