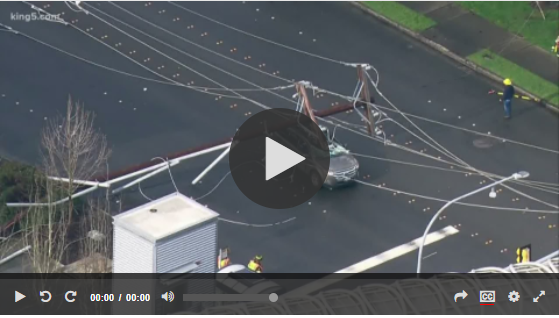 Yet another windstorm brought down power poles in Seattle’s SODO neighborhood, leading some people to wonder if there is a trend that needs to be addressed sooner rather than later.

“You just drive around and look at all the light poles. I mean, they’re probably old as I am and a lot of them are splintered,” said Todd Biesold of Merlino Foods.

The workers at Merlino Foods had a perfect view of the drama on Monday when a windstorm toppled power poles on Fourth Avenue South. The road was closed for hours as crews worked to repair the poles. Biesold said the sudden outage was at least the third in eight months.

“There’s a huge impact on our business,” he said, noting the scramble on Monday. “We’ve got a couple of million dollars worth of perishables in the building that you have to do something with.”

Erin Goodman, who leads the SODO BIA, said the pole problems have continued to mount with time. In a high-profile incident almost three years ago to the day, a windstorm knocked down roughly two dozen poles on East Marginal Way.  More of them came down, in the same area, in yet another windstorm last fall. Goodman said she’s also aware of recent electrical fires on poles, which have endangered nearby buildings.