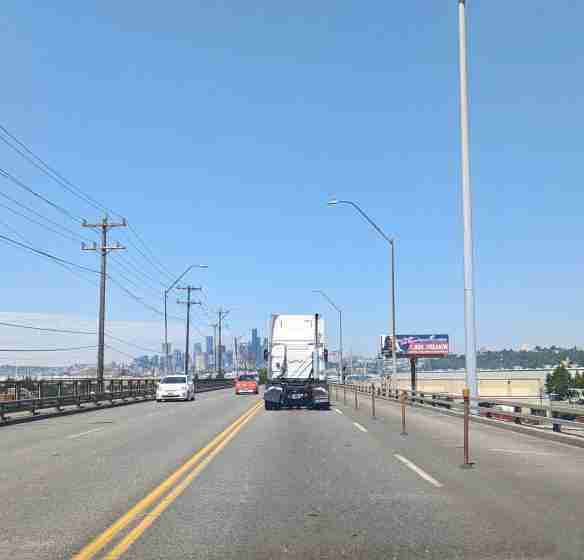 During a routine inspection of the Fourth Avenue South Bridge in late 2017, Seattle Department of Transportation crews noticed moderate to severe cracking. There was fraying in multiple places, most notably on the northern and southern approach slabs — the segments transitioning from roadway to bridge. While portions of the Sodo bridge were in fine condition, the deterioration was enough to rate its sufficiency as “functionally obsolete.”

In response, SDOT reduced northbound traffic by one lane and directed trucks traveling southbound to the inside lane.

“Detailed analysis of the strength of the concrete indicates that the cross beam cannot safely carry the heaviest truck combination that could occur on the bridge,” an SDOT staffer said in an email to Sodo stakeholders in early 2018.

Three and a half years later, the bridge is still unrepaired. Traffic is still reduced. Cones lining the northbound lane have become semi-permanent fixtures.

Erin Goodman, executive director of the Sodo Business Improvement Area, called Fourth a “release valve” that absorbs diverted traffic from other parts of the city. She suspects that’s especially true since the closure of the West Seattle Bridge.

“When Fourth Avenue gets messed up, it impacts the whole city,” she said.