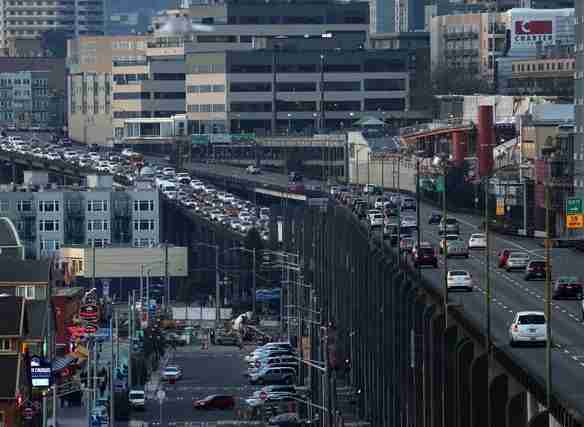 The Alaskan Way Viaduct will close this weekend in both directions, for its twice-yearly inspection and some roadwork at the Sodo entrance to the future Highway 99 tunnel. Northbound traffic closes from 11 p.m. Friday until 5 a.m. Monday. Drivers will be detoured toward surface roads at South Spokane Street, as traffic enters Sodo. Southbound lanes close from 5 a.m. to 6 p.m. on both Saturday and Sunday but will be open evenings. Drivers will be detoured at Denny Way, before the Battery Street Tunnel.

Inspections occur every October and March, in the wake of a 2001 earthquake that caused at least 6 inches of sinking and widespread cracking to the viaduct. The northbound closure is longer because Seattle Tunnel Partners equipment will occupy the curved northbound highway lanes, near the stadiums. Workers will extend a utility duct. They’ll also uncover part of a tunnel entrance ramp that was built, then temporarily filled, to create more surface area for earlier construction tasks in Sodo.

Sodo won’t be attracting major sports traffic this weekend. The Seahawks are on the road playing the Los Angeles Rams, the Mariners baseball season has ended and the Sounders FC aren’t playing.

The tunnel, designed to bypass downtown, is due to open in early 2019, followed by demolition of the 1953-vintage viaduct.