FROM THE OFFICE OF THE MAYOR

City, State to begin implementing next steps for I-5 and East Duwamish Greenbelt

SEATTLE (May 17, 2016) – Mayor Ed Murray and Governor Jay Inslee are initiating next steps to improve public safety and public health in the area under I-5 and in the East Duwamish Greenbelt along the freeway in South Seattle.

“Seattle and the State of Washington will work together to address decades-old safety and public health issues under I-5,” said Mayor Ed Murray. “Through a combination of outreach and services, as well as better access for first responders, we hope to transition those currently living in tents under the freeway into stable shelter, while supporting public safety in the area.”

“This is a person-centered approach with the necessary supports to shift people into more stable housing,” Inslee said. “I am pleased that the city of Seattle, King County, and the state are working together to assist those in need. The issues with the I-5 green belt are symptomatic of larger problems that we are working on with communities and partners around the state to alleviate homelessness for children, veterans, low-income workers and those with substance abuse or mental health issues.”

The City and State will take steps to: (1) transition people living in unsanctioned encampments under the freeway with meaningful offers of shelter and services; (2) clean up major health hazards, including human waste and garbage, and remove overgrown brush and other fire hazards; (3) improve access to the area for first responders and maintenance workers; and (4) engage a design consultant to make recommendations for deterring entry in dangerous locations and provide positive activation of other public areas.

Outreach teams from Seattle’s Union Gospel Mission will work for several weeks to build relationships with current occupants and offer outreach with offers of shelter and individualized services: case management, addiction treatment, housing assistance, food assistance and medical services. Mission will not be accepting funds from the City or State for outreach activities, but those contacted will have access to publicly funded shelter space, motel vouchers and travel assistance, as appropriate.

“We are encouraged to see the City and State address one of the most problematic areas in our community and look forward to partnering with them in this work,” said Jeff Lilley, president of Seattle’s Union Gospel Mission.  “We know many of these people by name and their unique situations. Whether someone struggles with mental illness, is in need of recovery services, qualifies for veteran’s aid, or has other challenges, we will connect them to social service providers who can best offer the help they need.”

After people have left the unsanctioned encampments, public health hazards, debris, overgrown brush, and fire hazards under the freeway will be removed by Departments of Transportation (WSDOT) and Corrections (DOC). Seattle Parks and Recreation will remove overgrown vegetation and debris from the greenbelt hillside above the freeway.

WSDOT will enhance and maintain the existing gravel roads that run alongside the freeway to improve access by first responders, maintenance workers and outreach teams.

Washington State’s 2016 Supplemental Transportation Budget allocated $1 million which will be used in all steps of the plan. Funding for outreach and services, as well as removing overgrown brush from the greenbelt, will be absorbed within existing City funding in 2016.

The City of Seattle will hire an independent consultant to engage the Seattle City Council and a diverse group of stakeholders within local government and the community to identify and recommend options for access management and future uses. The goal of access management is to allow maintenance crews and law enforcement to better serve the area, not to create an impenetrable barrier or fence. The consultant will also identify and recommend potential long-term activation strategies in areas where the space under the interstate allows for alternate uses. The state, county and city will review the final report and jointly agree on a path forward.

Seattle will spend nearly $50 million this year providing outreach, services and shelter for those experiencing homelessness, including $7 million approved following the mayor’s declaration of a State of Emergency.

On January 26, 2016, five people were shot and three killed under the freeway. A joint assessment of the area was led by Seattle Fire Chief Harold D. Scoggins. Participating agencies from the City of Seattle, King County and the State of Washington included WSDOT, Seattle Human Services Department, Public Health – Seattle & King County and other partners.

City of Seattle, Office of the Mayor 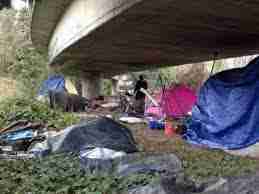